The SS-408 is our second most popular set for ham radio and electronics use... following the SS-508 .  Bristol Spline Wrenches are used in many military radio, avionics, and test equipment applications.  Additionally, these wrenches and the SS-508 are commonly used to work on Bell-Howell 16mm projectors and many other antique cameras. These are high-quality USA made original Bristol tools that will last.  These are not imported knock-offs.

Developed by the Bristol Co, the multi-spline drive system is recognized by design engineers as the superior method of transmitting torque because nearly 100% of wrenching force is applied at right angles to the load bearing spline surfaces of the socket. Other drive systems dissipate a significant amount of force into radial thrust, tending to expand the socket rather than tighten the screw. The substantial and effective wrench engagement inherent in the Bristol design addresses the problems caused by other fastening systems such as camout, socket reaming and rounding" of wrenches.

Decades ago, Bristol engineers invented the Bristol Spline Drive System for use in electromechanical instruments. They required screws and wrenches that could stand up to industrial environments, vibrations, and frequent removal and resetting. Excellent for set-screws and smaller cap screws requiring severe tightening, and for screws with shallow sockets. For frequent removal and resetting of screws and plugs, such as for tool inserts, purge screws, drain/filler plugs, template retainers, and replacement of worn parts. Bristol wrenches have been in continuous production in the United States since their original introduction.

Kit contains one each of the following wrenches. 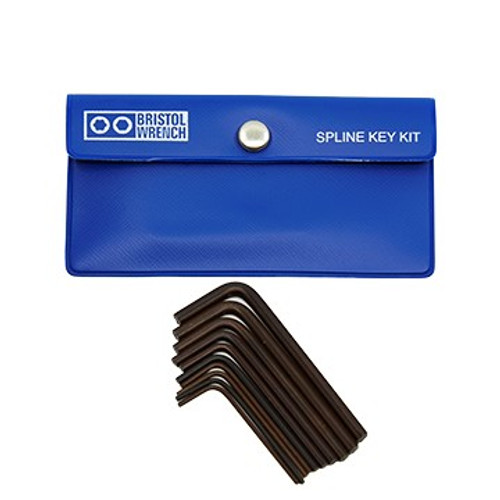